SUSHUMNA KRIYA YOGA is a traditional Kriya Yoga which is a very powerful and ancient meditation technique.

Mahavatar Babaji was initiated into Kriya Yoga by Parama Guru Sri Sri Sri Bhoga Siddhar. He had undertaken the mission of spreading Kriya Yoga, to the door steps of suffering humanity and mankind. He has initiated and taught Kriya Yoga practice to several devotees and seekers and is the icon of Kriya Yoga tradition. At the behest of Parama Guru Sri Sri Sri Bhoga Siddhar (spiritual master) of Mahavatar Babaji, Babaji further simplified Kriya Yoga, according to the needs of the times and made it accessible in general to common folk, the householder and city dweller, who were unable to renounce their families / worldly duties and go to secluded places like the Himalayas but also benefit from the age old Kriya Yoga technique. The earliest known luminaries who were initiated in to Kriya Yoga are Sri Adi Shankaracharya, Kabir Das, Shirdi Sai Baba and Lahari Mahasaya. read more 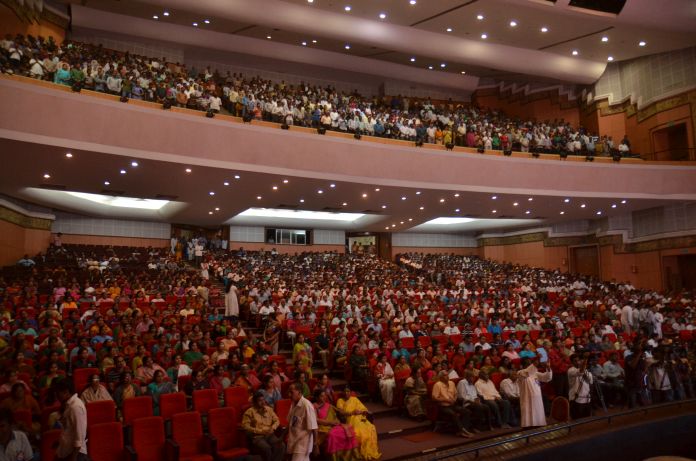 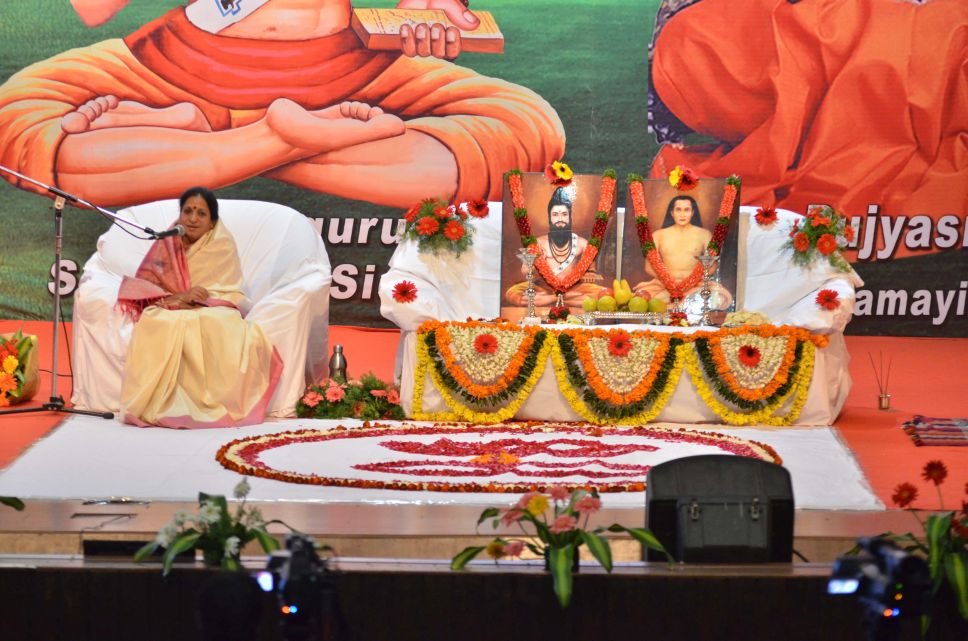 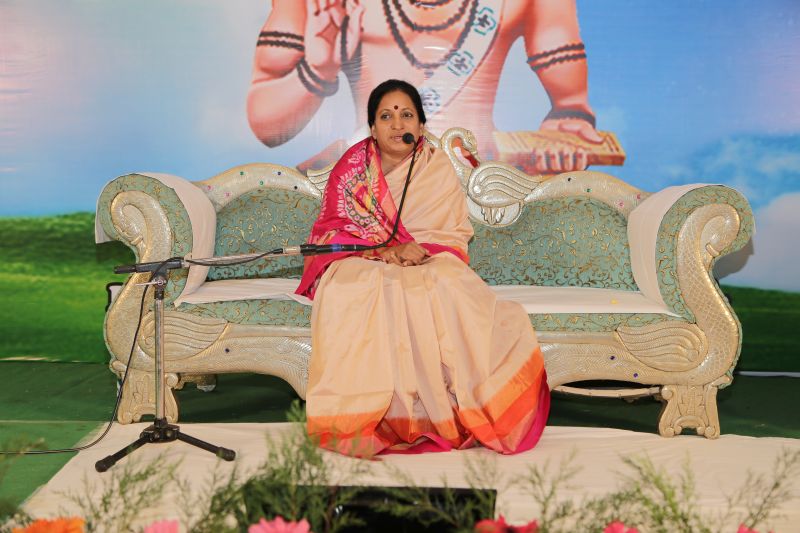 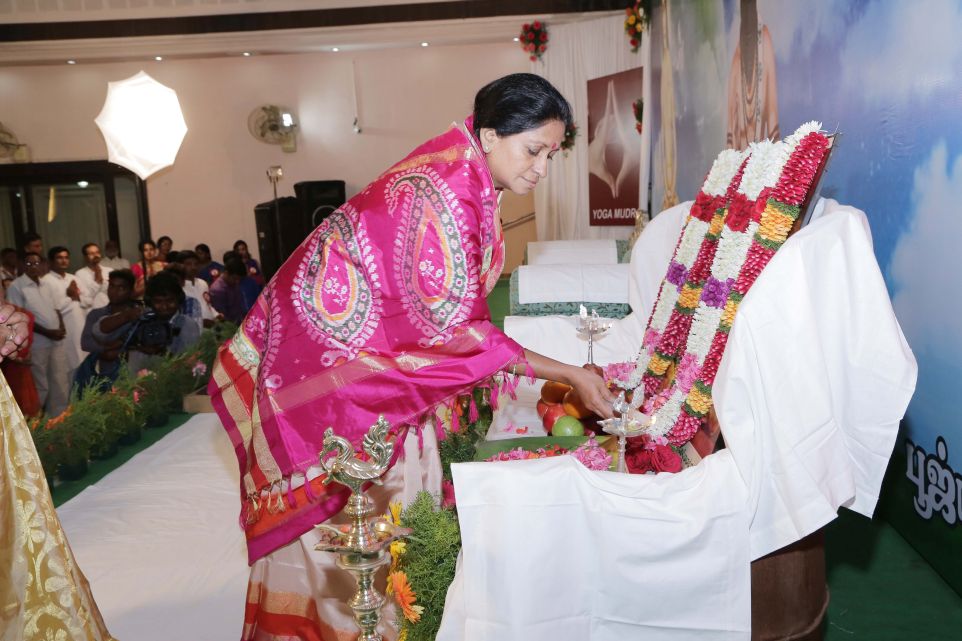 Sit in a straight and comfortable position. Keep your hands in Yoga Mudra.

I find myself more calm, happier and peaceful. Setting up of a group every night to remind us to meditate has benefited so many of us to continue our practice. Any time and any where I practice the Sushumna kriya yoga to bring my thinking back to peaceful and calm state. The benefits are enormous and difficult to name them all.

14th December 2014 was the day when i first met the light of my life "ammagaru". My 24 years of great longing to understand the meaning of my existence received an answer only after meeting my 'Guru' Atmanandamayi ammagaru. From the very moment of my meeting and receiving initiation from ammagaru, every second was a bliss. Ammagaru bestowed me with the super power to handle life with utmost ease. She has shown me the purest forms of love and showered tons and tons of compassion over me. I have successfully completed one year of spiritual journey under amma's guidance. From the deeper and deeper fathoms i prostrate in reverence to my divine mother for giving me a rebirth on this day.

My search for Bliss has led me here, and this a purpose larger than life - Sushumna Kriya Yoga!

I always thought Dhyanam or Meditation is for the Aliens,but an intense desire to get connected to my Guruji who attained samadhi in 1991,forced me to get initiated in to Sushumna kriya yoga by Pujyasri Atmananda mayi Mataji in 2005.Surprisingly I connected just not my Guruji alone,but to the universal Consciousness.

Through Sushumna Kriya Yoga, I am able to overcome anger and got relived from Life suffering disease (Psoriasis). Through Vicharana said by the words of Guru Mata(Pujyasri Aathmanandamayi ammagaru), Gained Immense patience. Now, I am able to enjoy my life with blissfulness and Godliness.

Sushumna Kriya Yoga helped me to connect to parama gurus and enhanced my spiritual Journey. I could experience oneness, Bliss with myself. I bow to Aathmanandamayi ammagaru for guiding towards Self Realization.

Being an MBA student, my schedule is always squeezed with deadlines, submissions, which in turn results in tensions. I have been practising Sushumna Kriya yoga since seven years. And with divine blessings of Gurus and Ammagaaru, I am always able to manage and prioritise my work,which also helps me to be stressfree.Everyday 49mins of meditation gives immense bliss and happiness.It helps me concentrate more and more each day. It is the best way to wipe out all the tensions and lead stress free life. Gurus and Ammagaaru keep me motivated all the time. They always advice me to give 100% without worrying about the results.And always I come out with the flying colours.

I was initiated to Sushumna Kriya yoga meditation by my husband before four years. I use to hardly believe in meditation. Since the time I got into the divine feet of Pujyashri Athmanandmayi Ammagaaru, my perspective of life has changed. Now I look towards life and its various events in altogether different view. It is filled with complete positivity, content and peacefulness. I am privileged to follow this enlightened path of blissfulness.

Inspired by the life history of Bhognath Siddar (the heavenly creator of Sushumna Kriya Yoga) I started practicing this technique in 2011. After only 3 days of my practice I could see the change. I could feel the energies through out my day,I regained my emotional balance and started enjoying sound sleep. I am surprised to see the change within few days of my practice. So I started practicing regularly and the results are beyond my expectations. I am ever thankful to my Guru mata Atmanandamayi for bringing such an effective technique in an easily accessible way to the modern man.